Cars aren’t a throwaway purchase for most of us. Next to a house, for most people they’re the most expensive thing you’ll ever own (unless your significant other has a particular taste for diamond jewellery). But beyond the regular service intervals, topping up oil and checking tyre pressure before a roadtrip, most of us don’t think much further when it comes to what goes on in an engine. That’s where engine cleaning comes in. For the month of July, the EuroSurgeon Performance Centre is offering a Hydrogen Cleaning service free of charge to every car that visits for a tune. […] First thing’s first – full disclosure This post is NOT written by a car expert. Heck, it’s not even written by a mechanic. This post is instead written from the very basic perspective of someone who knows less about how an engine works than Trump does about fighting a pandemic – sweet FA. So it was my great surprise when I learned this fun fact: the transmission in a car is not necessarily even made by the car manufacturer – in fact the same transmission can be found in an Aston Martin DBS V12 and a Kia Mohave! For today’s […]

Can diesel Macan be more “Porsche”? Yes it can! How about +100hp for a mini SUV Boxter S and GTS. Whats in the letters and now to get another 50hp with 110nm of torque. If you notice your AirCon being too warm or uneven – read up on what could be happening. 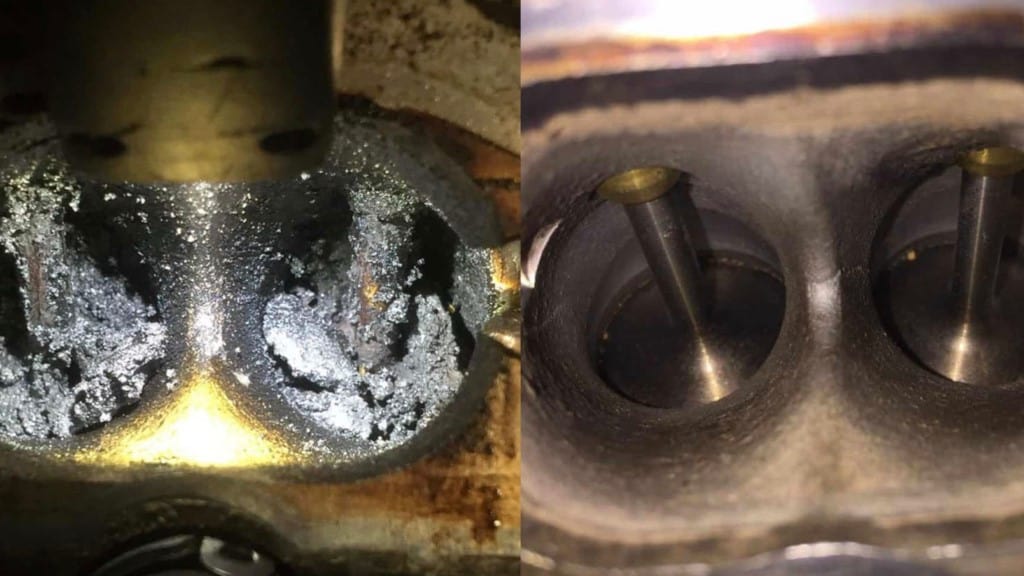 What is Carbon build up? Why is it a problem? Find out more how this problem can be solved. 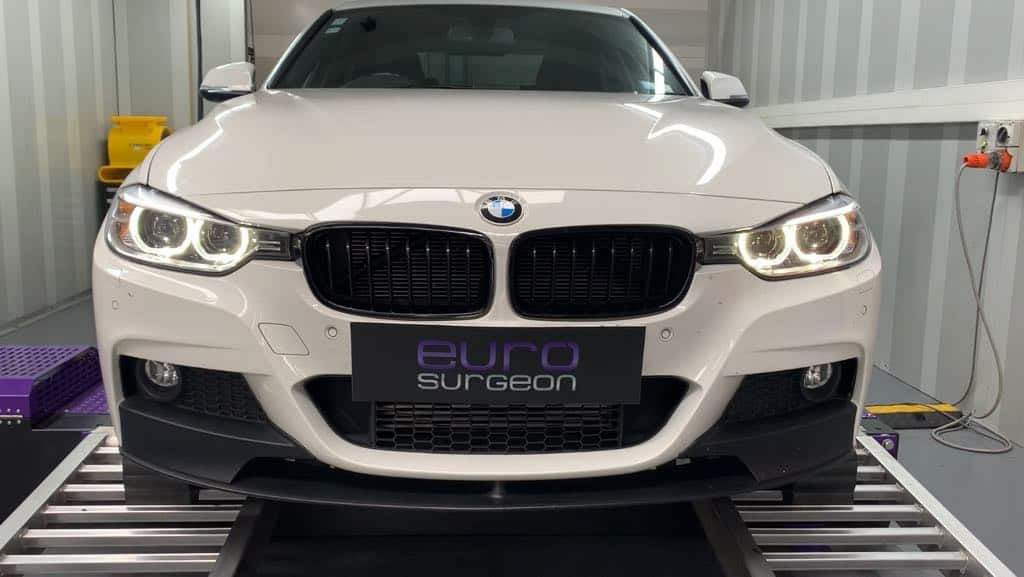 Finally BMW F30 320i tuning yields major gains! +70HP and 130Nm of torque. Its not a suprise that the BMW 320i has been one of the most commonly found Euro cars on New Zealand roads. It’s because they are quite affordable, look the part and are easy to look after. However the most common question regarding the BMW we get asked is always the same: “Can you make my BMW 320i faster?” For the past decade the answer was almost always a resounding “no”. We could do minor 320i tuning tricks, like improving the accelerator response, getting the maintenance sorted […] 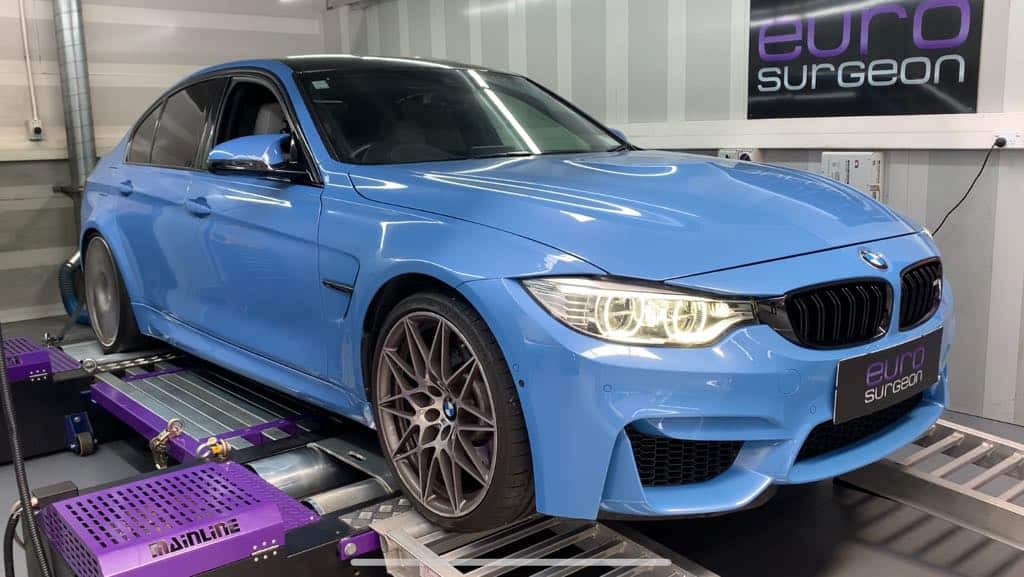 How about getting +75WHP and 105Nm of torque at the wheels for a daily car? Let’s talk about a very capable BMW F80 M3 and F82 M4 with the S55 engine. Whenever someone mentions BMW M3, I get a little over excited. The history, the dedication to motorsport, it being a proper track weapon, the feel of being pushed into the seat sideways. Everything about it is brilliant. What never gets mentioned is living with one on a day to day basis. What originally has been made to be a homologated race machine progressed through 30 years of evolution with […] Although the T5 was launched in 2002, production for the van didn’t begin until 2003. The van was available globally, excluding the United States due to the 25% extra chicken tax on importation costs. T5 Transporters were available in various configurations such as the Van, Minibus, Single-cab, Double-cab, Drop side or Chassis Truck. It was also available as a people carrier with various seating options, which were also known as the Shuttle, Kombi, Caravelle, and Multivan. Volkswagen released a new version of the T5 Transporter which is often referred to as the T5 Facelift (which this is one of), […] Additional 90nm of torque for BMW X5 Diesel? Not a problem. Since the year 2000 when the first mix of Range Rover technology and BMW’s desire to make an SUV was set in stone, the X5 has been one of the most popular solutions to urban off-roading. Why so much love for a BMW Diesel X5? The phenomenal value and the utility factor that you get. Trunk space to pack the family for a weekend away. Do the shopping run for a week, or perhaps you need to tow that 2.5 tonne Rayglass? Make it a diesel X5 40D, and […] This car came in to us 100% stock standard, and the customer wanted more power after seeing the results on previous R’s we had done. The Stage 2 option is probably our most popular option and really livens up the car with basic upgrades. Our Stage 2 cars with full weight on 98 pump gas average 1/4 mile times of 13 seconds – which makes for quite a fast little hatch! Even after more than half a year, the car was still making the same reliable power after we logged it for a health check on our in house Mainline […] 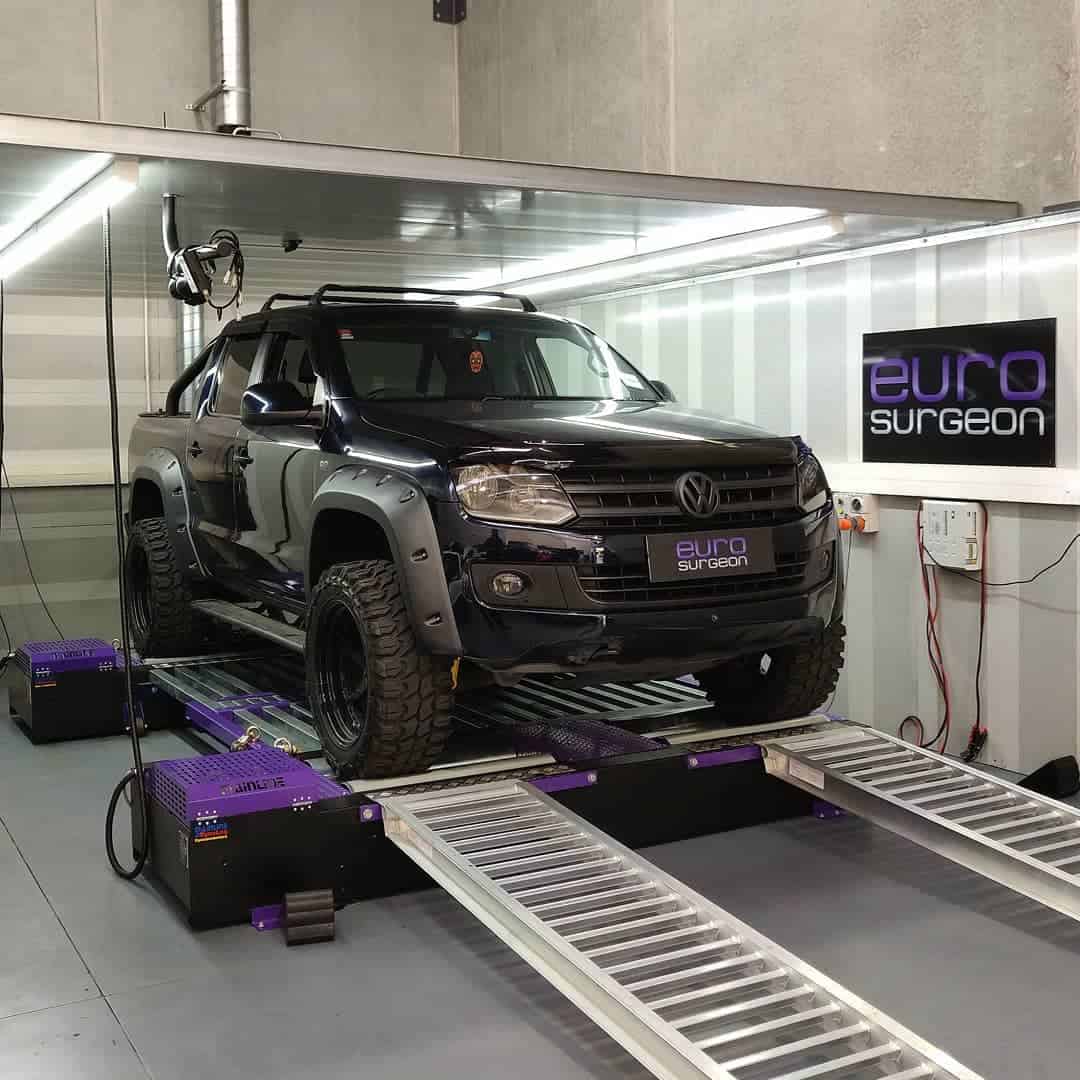 The all-time Euro-loving tradie favorite. The only Euro ute out there. (The Mercedes X-Class is a Navara, so that doesn’t really count!) For years VW stuck to their simple and quite classic design of the truck that sees plenty of towing, dirt bikes, boats and tools. All is good, apart from a lack of power. The 2.0L engine makes just enough to get it moving, but goes nowhere near making it “exciting”. Add a partially blocked DPF and dying EGR valve and you have a big slug. But not all is lost!   This particular truck got a major lift […] Merc’s Go-cart from Hell! Mercedes A45 Performance to match the title? Need extra 40hp and 60nm for that. With an amazing amount of hot hatches on the market here, one may get lost in all the choices. Mercedes was ignoring the hot hatch category until 2014, but once they entered the market, boy did they get it right. Spacious, nimble, maneuverable and well… somewhat underwhelming. When we drove one many years ago the response was – “Is that all? Really?” This German idea felt a bit unfinished. Looking at the hardware, everything was there. Decent engine, decent size turbo, only […] Range Rover tuning is far from new. Since the days of rugged Discovery the diesel Land Rover always had massive potential. Slightly more refined and suburban jungle orientated than the Discovery, the Range Rover Sport is happy to be driven around the city streets but has the flexibility to be taken up the mountain on the weekend or be loaded with a trailer heading off to Hampton Downs. Sometimes you just wish that it didn’t take 10.3 seconds to get to 100Kph with the pedal planted to the floor! Range rover tuning is a fix for this. Feel as though […] Light-weight and an adequate power plant make it a joy to drive, although at times you get a feeling that the car is not giving you 100% of it’s capability. The reason for this is a rather simple one – it’s hiding another 47HP and 95Nm from stock. All of a sudden the sheer acceleration gets you to hold your breath as the pedal is squeezed! 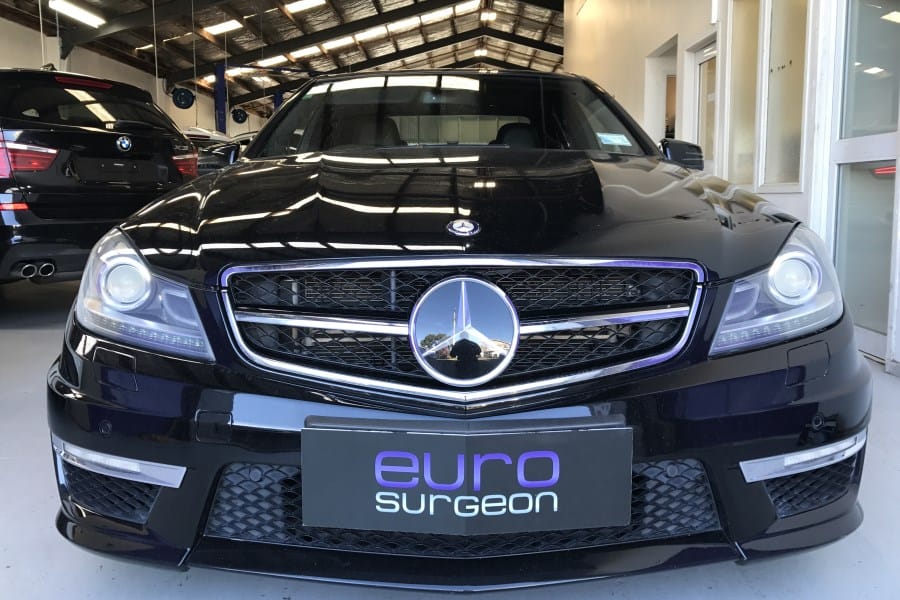 Let’s examine one conspiracy theory. It is a popular held belief that ‘special release’ models are faster and for that you need to fork out another $50k. Let’s call it a ‘marketing ploy’. What is it going to take for your C63 to go from being stock to achieving the power produced by that of the 507 Special Edition? An ECU remap by EuroSurgeon is the answer! You didn’t buy a C63 to drive it to Pak’nSave and back – you got it to enjoy that chill-inducing V8 rumble and to genuinely love the driving experience. So why not add […] The Audi Q7 – the perfect multi-tasker. Ideal for taking the whole family to the Coromandel for the weekend, but it has the ability to tow dual horse floats for days on end. Whether it be taking the kids on the school run or heading away on a skiing adventure, the Q7 always needs to perform at its best. There’s just one catch though – it’s a heavy car! Weighing just shy of 2,500 kg it needs all the power it can get. While the factory mapped engine does an adequate job of getting it to move, it still leaves […] Whether your Amarok is your work ute, weekend hauler, or family wagon, they remain an excellent tow rig. Driving Amaroks has the tendency to become a tiny bit infuriating. when you realise that 2 tons do require some additional time to get off the line and move. That passing lane does require good roll on well in advance. We are not reinventing VWs by any means, we are refining them to achieve up to an extra 28 Hp and 65 Nm of torque. All of a sudden a big truck feels like a car, responding a lot quicker and […] Keeping it simple, nimble and comfortable is a well balanced act found in each Mercedes-Benz Diesel. Most of the time, no one will actually pick up that you drive a diesel. Feel like somebody robbed you of a bit of excitement from driving it? The cure for that comes from fixing the accelerator response and adding around 64HP and 90Nm of torque to it. The Discovery is one of our favourite trucks! A great roomy, multi-functional all rounder – not slow, but it does feel like the truck is a little sleepy most of the time! After the tune, a huge difference is noted on take-off. No more hesitant two second delays when taking off from the lights, mid-range boost rolls on and stays on without drop offs, creating more of a car like feel than that of a 2.2 ton offroader. As an extra bonus we get an added 25HP and 60Nm of torque with a 1.8L improvement on fuel economy! Towing a […] 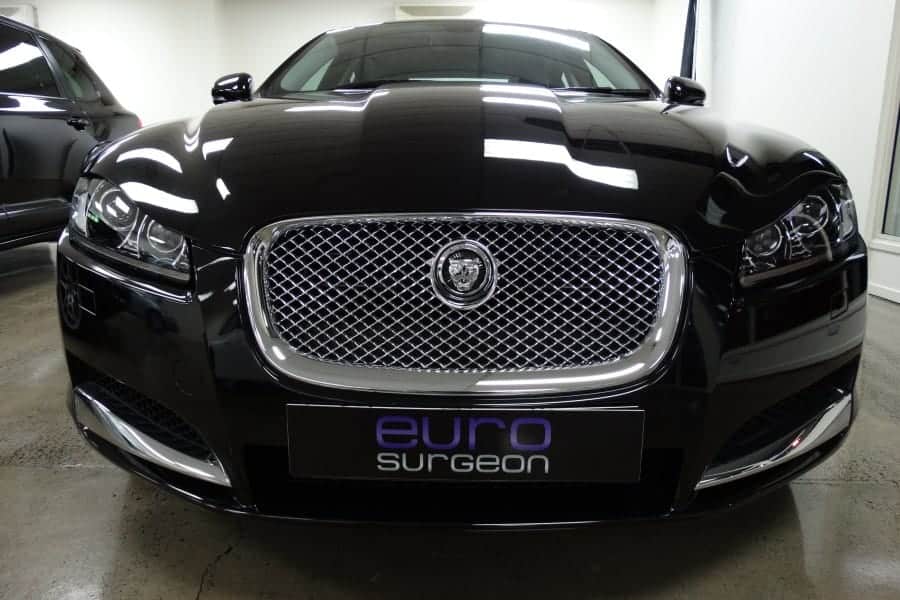 Combining a reasonably lightweight body and rather impressive appearance, the Jaguar XF is a good all rounder, although sadly an all rounder without an edge! It’s good, but not worthy of huge excitement. How about 292HP vs 211HP at stock and 573Nm VS 450Nm at stock? This places it into a completely different league where only a select few will ever be achieving the complete package – power comfort and refinement! 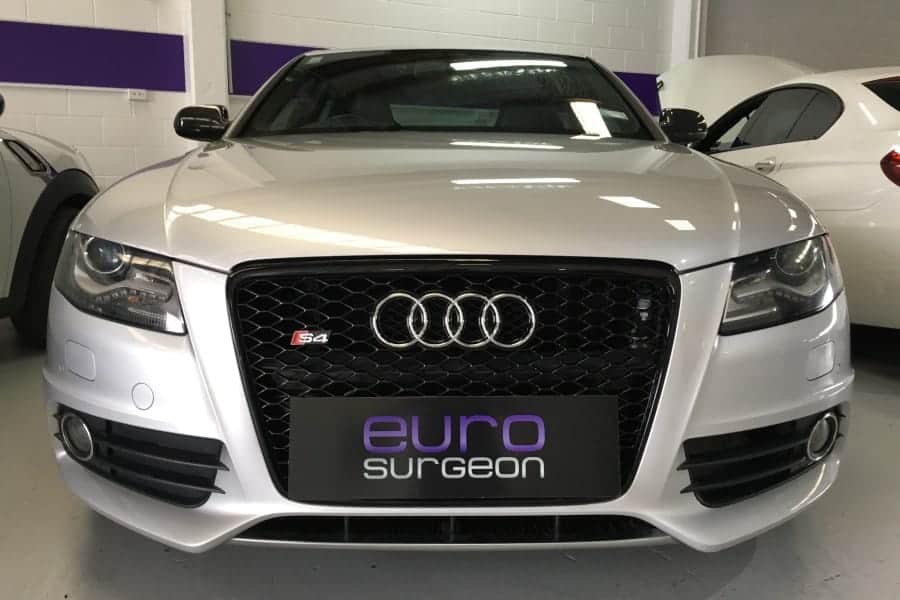 Stage 1 – Hidden ECU Remap The Audi 3.0 TFSI engine is one of those rare experiments gone right for Audi. VAG know the ropes of turbo setups and fast naturally-aspirated V8s, so the release of a supercharger was slightly unusual for them. The ‘T’ in ‘TFSI’ no longer stands for turbo, but rather the concept of supercharging in general. Figure that one out! Since the release in August 2008 at the Moscow International Motor Show, it’s been installed in almost every Audi model. Grunty, nimble, and with plenty of potential, Audi’s A6, A7, SQ5, Q7, S4 and S5 models […] 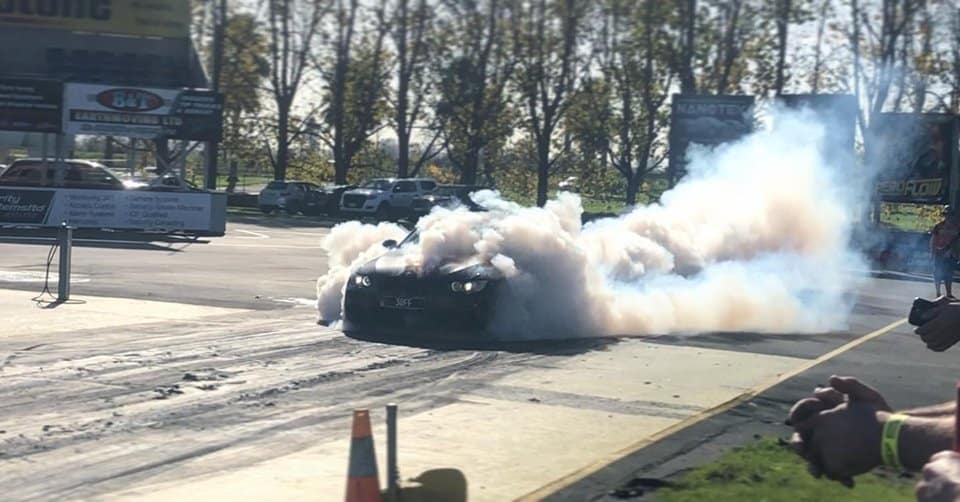 ECU Tuning of a 335i is a prime example of a well responsive engine Let’s look at the numbers:Stock: 306HP or 225kW and 400Nm of torqueEuroSurgeon Tuned: 370HP or 272kW and 500Nm of torque The end result is breathtaking acceleration, pull from any gear and a very linear torque curve. The remap includes adjustment to the throttle position, meaning there’s no delay when the loud pedal is pressed! But the fun doesn’t end there: for 335i’s produced from March 2007 onward, the Alpina B3 transmission flash is also available. Faster shifts Almost no loss of power in between shifts Almost […]